NashMash, the Nashville-specific social media Mashup site, launched its second update this month and with it a handful of new features that allow users to mold the localized feed once they’ve signed in via Twitter ID.

The most visible of these is the appearance of a new Digg-like button for each 140-character Twitter message (shown in the picture) on the front page. This is particularly interesting because it treats each message as if it was a separate piece of news, which in all likelihood will probably contain a link to a blog post or news article. 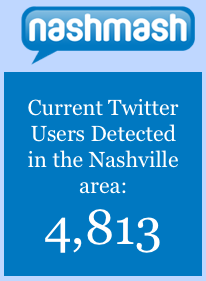 It’s good news for me since the majority of tweets I send contain links that point to an article. With that said, it would not be dificult to game links to the top. While tinkering with the new features and as a personal disclosure, I “liked” one of my own tweets about Nathan Baker’s deadyard, but left the others to the community to decide. In the future I wouldn’t be surprised if the functionality to vote on your own tweets was removed for this purpose. Then again, with 4,813 recognized nashville twitter users, I can’t imagine it would be too difficult to weed out bad eggs and ban ip addresses (so I wouldn’t advise anyone to game their stuff, or even their friends stuff to the top). Still, I’m reserving all judgement until the site pushes out all intended features to the public.

Other features include keyword monitoring, a dashboard for logged in users and personalized statistics. For more information about the new features, check out the NashMash blog.