Long Overdue Children’s Book Is On the Way

Today is significant for two reasons: 1) My friend Stephanie Gurne’s sister is getting married and 2) shortly there after we’ll be resuming the children’s book we started month and months ago after she got side tracked with massive wedding planning tasks. 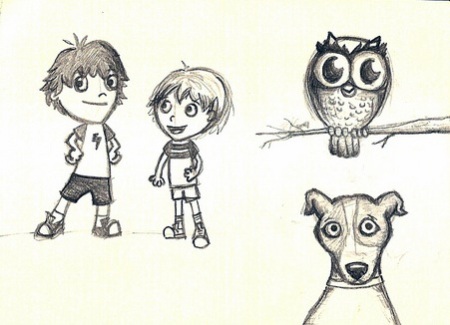 The artwork shown above was actually from some early sketches Steph did after we initially discussed the story, which is about a little boy and his brother who decide their dad must be a super-hero since he’s always flying in and out for work. The working title is, predictably, “I Think My Dad Is a Super-Hero” and it’s loosely based off of my own memories of growing up with my little brother.

The project has actually been around much longer, as I originally wrote the script in late 2006 for a friend who didn’t quite understand the concept of illustrating a story made for children. I had very little interest in pursuing it past that point until Stephanie mentioned that it was one of her main career ambitions to do create a children’s book. I casually threw the idea out and have been in love with it ever since she did the initial sketches. Seriously, I can’t imagine anyone else doing the book now.

Here are a few more sketches by Stephanie Gurne (@sgurne on Twitter):

This entry was posted on Saturday, November 8th, 2008 at 7:35 pm and is filed under Side Projects. You can follow any responses to this entry through the RSS 2.0 feed. You can leave a response, or trackback from your own site.