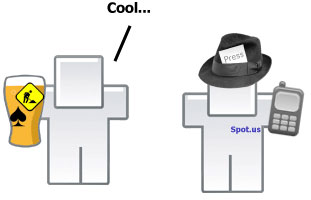 Apologies may be in order for the handful of folks who visit my new blog since I have not updated in what seems like a century. Saying I was too busy really isn’t an option when I consider the amount of writing done by my friends, who keep just as full a work load. This past Labor Day weekend I was “laboring” over news coverage during Dragon*Con 2008 in Atlanta. I had never been to a giant convention of geeks so this was definitely an experience for me. And while I love comic books and most things found in a comic shop, the real draw of me attending the convention was being able to cover it as a serious journalist.

That’s right, I said serious. Regardless of what is being reporting on, a degree of professionalism should always be present. Geeks of Doom [geeksofdoom.com] was gracious enough to allow me to cover the event, which included various scooping news about the Dragon Ball live action movie, Firefly/Serenity, and a few Battlestar Galactica stories — one of which was submitted by digg.com user diggboss and made it to the front page.

If you aren’t a huge social media/social news consumer then hitting the front page of a Web site like digg probably means nothing at all. I, however, have been an active user on the site since December of 2005 and I can tell you as a journalist, having an article move to the front page is every bit as exciting as seeing your name as the by-line of a top fold story in a printed newspaper. Actually, the audience is quite a bit larger so this feeling could be even greater. And when I say “hit” “Move” or “Made it to” the front page, I mean that you have submitted a URL to a social news Web site that allows its users to vote on the value of content from said URL.

I’ve heard from plenty of people that seeing your name in print never gets old. In fact, the first journalism teacher I ever had said to me upon the day of my first published article: “Once you get ink in your blood it doesn’t come out.” If this is the case, then “Digital” ink is far more addictive.

Muhammad Saleem, [muhammadsaleem.com] who is no stranger to digg.com’s front page, often discusses the addictiveness in his articles, podcasts (via thedrilldown.com) and in general conversation. I don’t think it’s something you can really understand until you’ve hit the front page of a social network with over a million active users, who have deemed your submission worth reading. Mu says (and I’m paraphasing from memory) when someone has this kind of experience it can be addictive and cause people to try and constantly get back to the front page — prompting more submissions, more spreading the word about things you’ve submitted, etc. The actual information you’ve gathered/found becomes almost parallel with the act of telling others it has been submitted.

I know that feeling well, but at the time of my first front page submission, I was not yet adept at participating in social media sites  to make the process continue as it has with the few hundred top digg.com users. There were times when I found it unfair that a few wrong moves at the beginning of my social media experience made it near impossible to become a frequent submitter of popular content. I see now that this effort was wasted on doing an arbitrary task that the community — aided by mathematical equations and of course technology — had deemed me incapable of performing. And all the while, I was working as a journalist.

The second time I made the front page of digg, [via Geeks of Doom Coverage a few days ago], it was with content I had produced and spent zero effort publicizing. I didn’t even know about the submission, let alone the front page hit.

It just made me reassess the necessity of submitting verses reporting. Each action has its role.

I’m not saying I’ll stop submitting stories I think are worth reading, because I won’t, but I’m putting a re emphasis on making sure there’s plenty of good reporting for people to even have the opportunity to vote on.

[The beer held by the first digg icon is actually Mu Brew, produced by BabyMan distilleries . Seriously, someone make this…please.]

This entry was posted on Friday, September 5th, 2008 at 9:06 am and is filed under Journalism, Social Media, Web Culture. You can follow any responses to this entry through the RSS 2.0 feed. You can leave a response, or trackback from your own site.